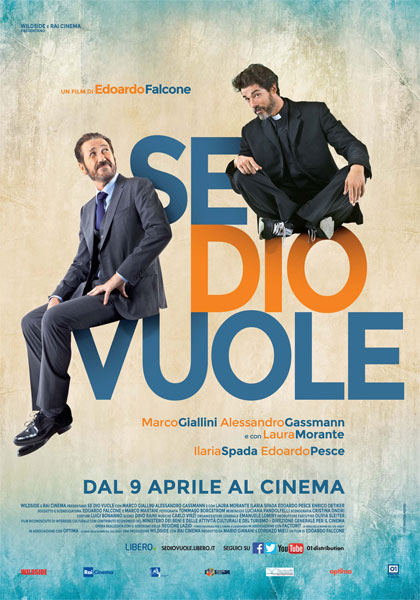 What may seem like a cumbersome and artificial premise is revealed instead as the beginning of a great contemporary comedy that, without copying anyone, find its way, its rhythm, its identity, never replacing the comic narrative subtlety for a superficial characterization in the construction of complex characters. The pace is fast and the twists and turns smart and abrupt, as happens in reality, without pretending that the characters are too stupid to understand what they are doing.

The story becomes more and more original, the witty dialogue is realistic and at times poetic, and the characters have many different facets (including the “pusillanimous” Gianni, well played by Edoardo Pesce, and the “silly goose” Bianca showing once again the great comic talent of Ilaria Spada). But it is the central duet between Marco Giallini in the role of Tommaso and Alessandro Gassman in the role of Don Pietro to make “God Willing” irresistible. Giallini act as the main anchor to the story with his ability to remain credible through the transformation of his character. Gassman finally engages in a character other than the rich and arrogant blowhard, where Italian cinema has relegated him recently (see “Our Boys” and “The Name of his Son”). Even the product placements are discreet and relevant, and instead of the omnipresent voice-over and the usual blasted American music to tell the story are the events and the characters.

The additional strength of “God Willing” is the ability to measure itself with lightness and depth with the theme of the divine (and the church as the institution “most obscurantist in history”, and the need for an active priesthood who can get out with everyday people). Never preaching and without even ever taking a position for or against God or the Church, the film is about the need for each of us to aim for something higher than what the daily reality offers us, it says what is lacking in each of us without even realizing it, and how everyone tries to fill that void without realizing that the best way to do this is to learn to look beyond the tip of our noses.

The debut film from writer Edoardo Falcone, helped in the writing by a Marco Martani finally tired of simple farces; let us leave the screening finally reconciled with the Italian comedy of today, and hopeful for a new course in the writing of future comedies, without intellectual snobbery and without affectations, that can speak to the entire audience.