In the summer of 1980, on the backdrop of two tragic events, the downing of a commercial airliner over Ustica and the bombing of the train station in Bologna, we meet Martino, a shy introverted fourteen years old that is spending his vacations with an older brother and his friends. One day, while walking on the beach, they see three American soldiers surfing in the beach inside the military zone controlled by NATO. Martino is impressed by the ability of the soldiers to ride the waves and, entering the forbidden beach thru a hole in the net, he runs into Captain Jeff Clark. A strange friendship is born between the two, growing with the surfing lessons Captain Clark is giving Martino while he is falling in love with his older brother friend.
IN ITALIAN WITH ENGLISH SUBTITLES. 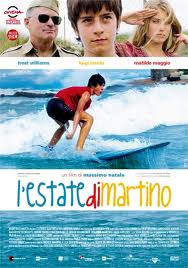