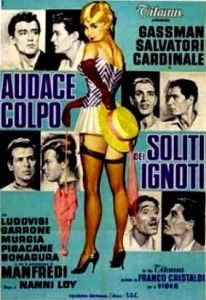 The Miami Dade College Tower Theater, Cinema Italy and Società Dante Alighieri in collaboration with the Consulate General of Italy are proud to invite you to a screening to promote Italian Culture in South Florida.

L’Audace Colpo dei Soliti Ignoti
Directed by Nanny Loy
Italy, 1959, 105 min. Comedy. Not Rated.
Cast: Nino Manfredi, Renato Salvatori, Carmela Nicosia
IN ITALIAN WITH ENGLISH SUBTITLES
The usual gang of robbers in engaged by a thief from Milan to steal a suitcase full of money, but troubles will menace the success of the operation.
This film is the first in a tribute trilogy dedicated to the great classic Italian actor Nino Manfredi and will be followed by two more films on September 9th and October 14th respectively.
(In Italian with English subtitles)
Donations and free passes at the Theater Box Office​​