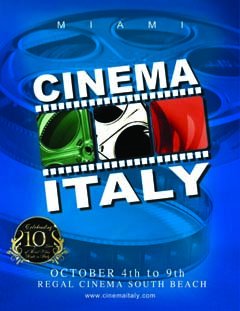 The dates are fast approaching on the tenth anniversary of Cinema Italy in Miami and the Beaches with Opening Night slated for October 4th with the opening film at the Regal Cinema South Beach followed by the opening party around the fabulous pool at the Delano Hotel. All new films will be screened at the Regal Cinema, corner of Alton and Lincoln rds., from the 4th to the 9th of October when the Festival will conclude with our signature Closing Night and Award Ceremony at Smith and Wollensky in South Point. There will be after parties in the hottest clubs as well as many other events and screenings, for more information please visit www.cinemaitaly.com often as the information will be updated on a daily basis. You can also contact the Festival organizers at 305-864-0101